Welcome to CBA's Project Belonging page! CBA is partnering with LiNK Jewish Buffalo to help create an atmosphere of inclusion within our synagogue and beyond.  Project Belonging consists of events, website postings, policies and belonging initiatives all geared towards inclusion of all people regardless of ethnicity, color, creed, gender identity, orientation or physical ability.

Help Support the Black Community in Buffalo During Crisis 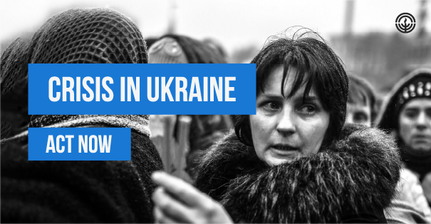 We've Worked in Ukraine for Decades

Jewish Buffalo's ties to Ukraine go back well over a century, from the many members of our community with ancestral ties to Sokolivka to our support for Jews behind the Iron Curtain to today's heartwrenching emergency.

Ukraine’s estimated 200,000 Jews rely on the strong presence built up through years of Federation support that is today serving as a lifeline for the community. Through our partner agencies JDC, The Jewish Agency for Israel, and World ORT, we’re there on the ground every day of the year, helping the most vulnerable and supporting programming to help younger generations reimagine Jewish life where it was all but destroyed.

TODAY, THE NEED IS URGENT

As the crisis in Ukraine escalates, thousands have come under fire in areas across the country. Thousands more have fled the fighting. Federations are planning to allocate millions of dollars to our partner agencies on the ground. Immediate and short term needs already total about $20 million.
Give Today 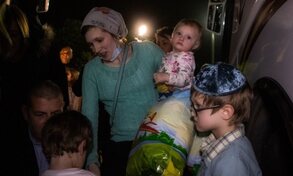 In response to Russia’s attack on Ukraine, Israel is gearing up for another large wave of immigration. According to Yaakov Hagoel, chairman of the World Zionist Organization and acting chairman of the Jewish Agency for Israel, there is a realistic possibility that “there will be tens of thousands of new olim”—Jewish immigrants—“in Israel from Russia and Ukraine within two months.” Israel’s Law of Return allows Jews around the world to immigrate there, and Hagoel noted that there are currently an estimated 200,000 Jews in Ukraine who are eligible.
Read Full Article

The Rabbi's Daughter: Following the Legacy of Social Justice 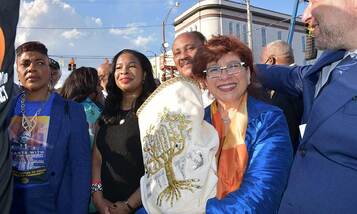 Following in the footsteps of her father, Abraham Joshua Heschel, the biblical scholar is at the forefront of the march toward social justice and reframing Judaism in the tradition of the prophets.

As many Jewish families set their seder tables this year, they will place an orange next to the parsley, egg and shank bone—a contemporary ritual invented by Susannah Heschel, the biblical scholar, Jewish feminist and daughter of the late Jewish philosopher and civil rights icon Rabbi Abraham Joshua Heschel. Legend has it that the custom came about after an Orthodox Jewish heckler interrupted one of Susannah Heschel’s lectures on feminism, shouting, “A woman belongs on the bimah as much as an orange belongs on the seder plate!"​
Read Full Article 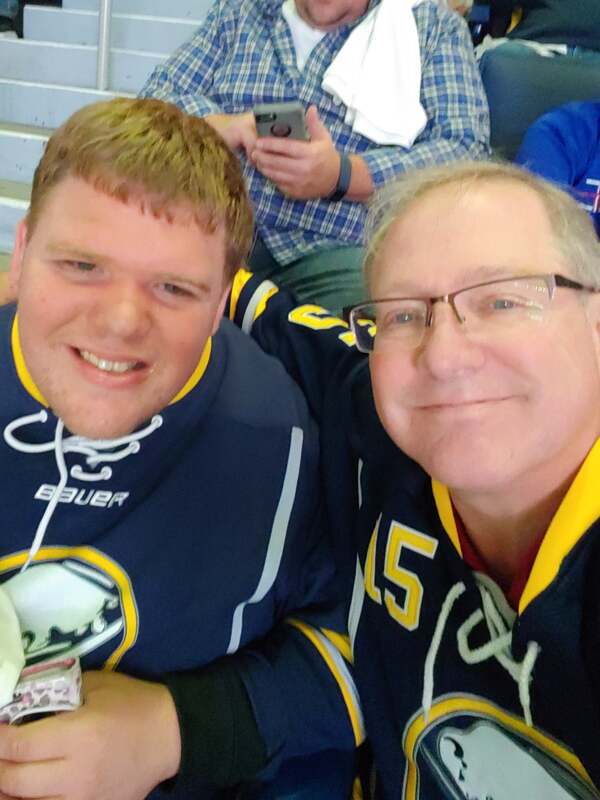 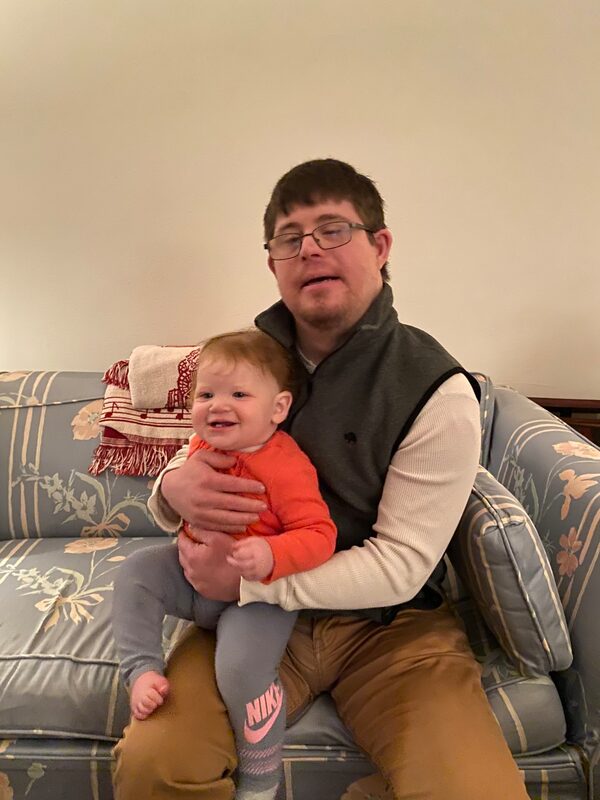 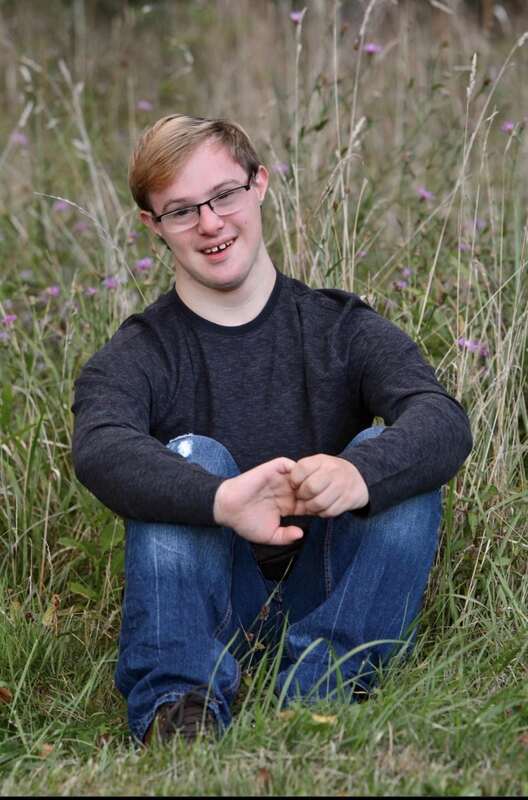 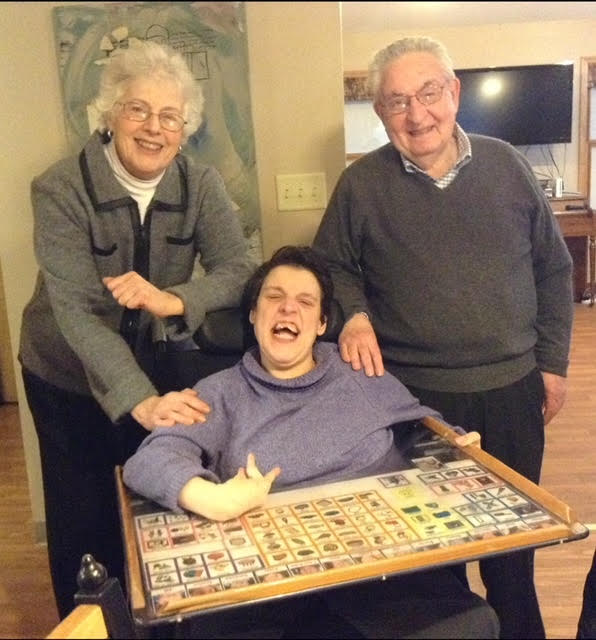 LiNK’s Belonging vision is for all Jews, their friends and Life partners of other faiths, and people exploring Judaism to feel welcome to participate in Jewish living and learning experiences to the extent of their abilities and interest, and to find a space of belonging in Jewish Buffalo regardless of race, gender identity, sexual orientation, or ability. For more information on Belonging, please email Mike Steklof here. 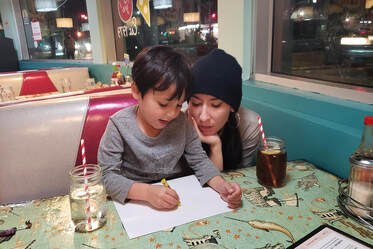 This Jewish Mom Wants You to Know What Being Pregnant and Disabled Is Like
When Sonja Sharp was 29 and pregnant with her first child, she made an appointment with an obstetrician her friends had recommended. But that doctor took one look at the expectant mother’s chart and asked her to leave. “Not ‘congratulations,’ no ‘I’m sorry,’” Sharp recalled. “She said, ‘You are a liability. We cannot see you. There is the door. Goodbye.’”
Sharp quickly realized that the Upper West Side practice was closed to her because, having suffered a spinal cord injury when she was a child, she is disabled. She went on to receive prenatal care at a practice specializing in high-risk pregnancies and had a mostly positive experience. “But I was continuously surprised that there was always testing that I didn’t really consent to,” she said, adding that nobody there talked to her about how she would deliver until she was 30 weeks along.
Read Full Article

The Center for Jewish Engagement and Learning is now....
LiNK JEWISH BUFFALO
LiNK Jewish Buffalo’s vision is for all Jews, their friends and life partners, and those exploring Judaism to have access to Jewish living and learning experiences that help them thrive; and to welcome all regardless of race, gender identity, sexual orientation, or ability.

The word link, means to connect – or – the relationship between two things. You will see in our new brand a small i, which represents you, the individual, who is always at the center of our work. The soft and rounded letters evoke an openness, a feeling of being surrounded by others (friends, community, the Jewish calendar, our ancestors) – and b’tzelem elokim – another one of our guiding values, that underscores how everyone has something of value to contribute and everyone has the right to belong. Our brand colors are warm and vibrant, and we hope conjure a sense of curiosity, an invitation to explore, ask questions and engage.

What has not changed — our mission, vision, and purpose: to serve you and your families through PJ Library, PJ Our Way/Middle School Engagement, the Buffalo Jewish Teen Initiative (in partnership with the JCC), Nickel City Jews, Adult Engagement and Learning, Women and Men Gathering, and Buffalo Israel Experience.
Register for Classes 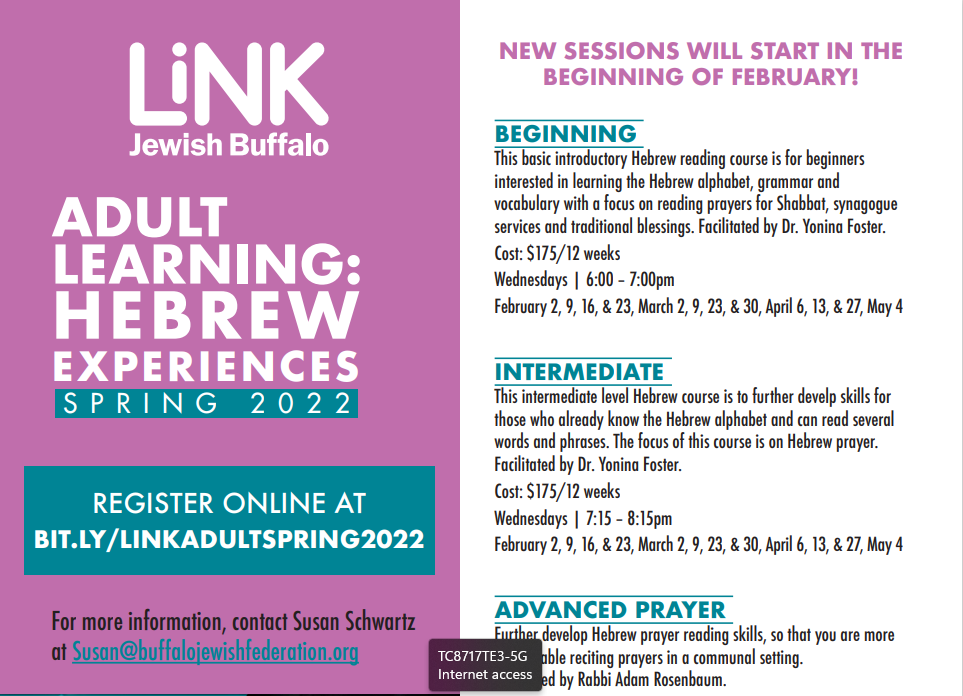 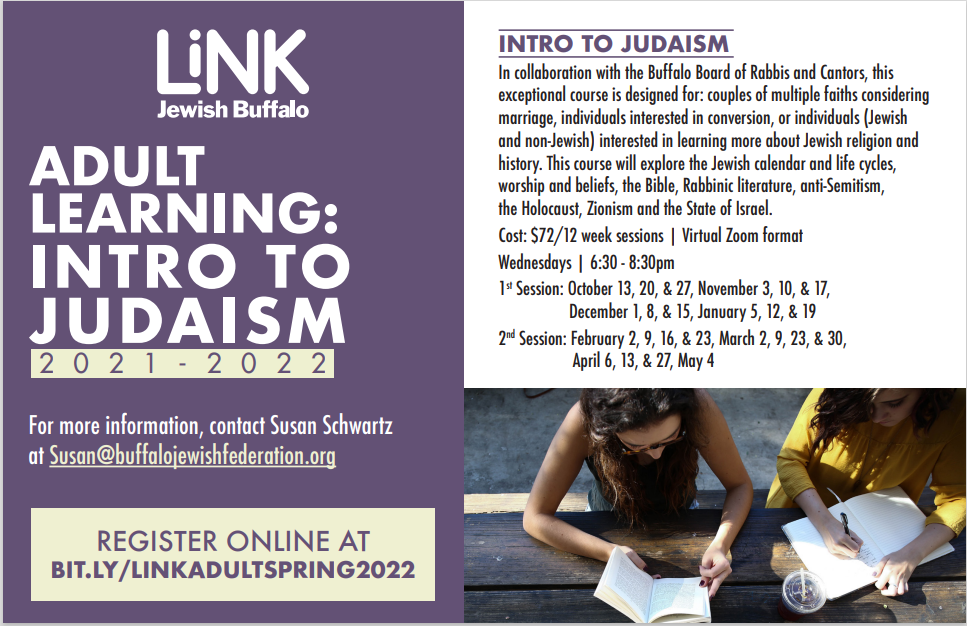 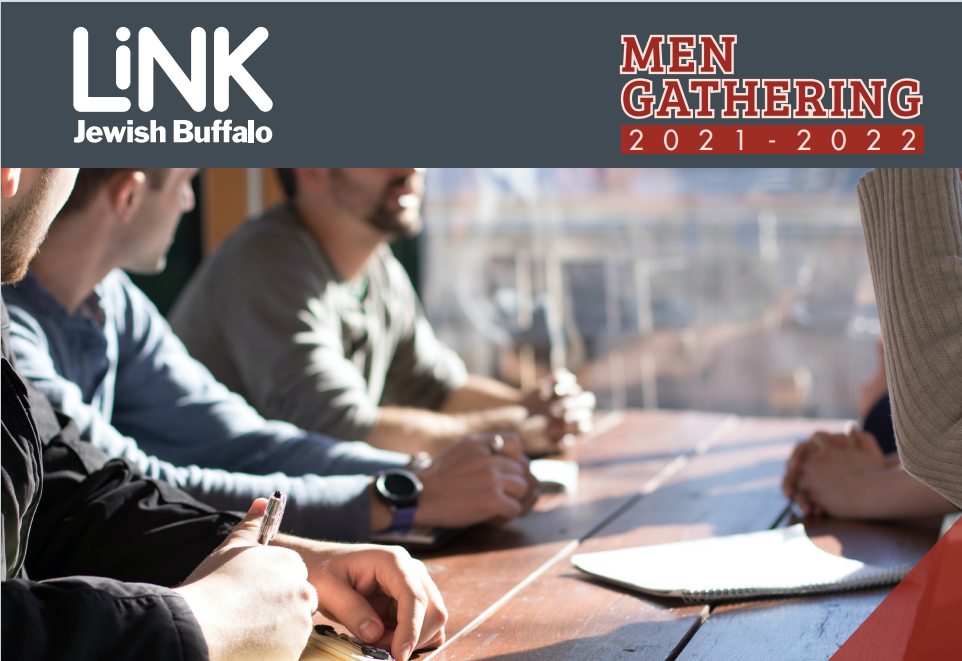 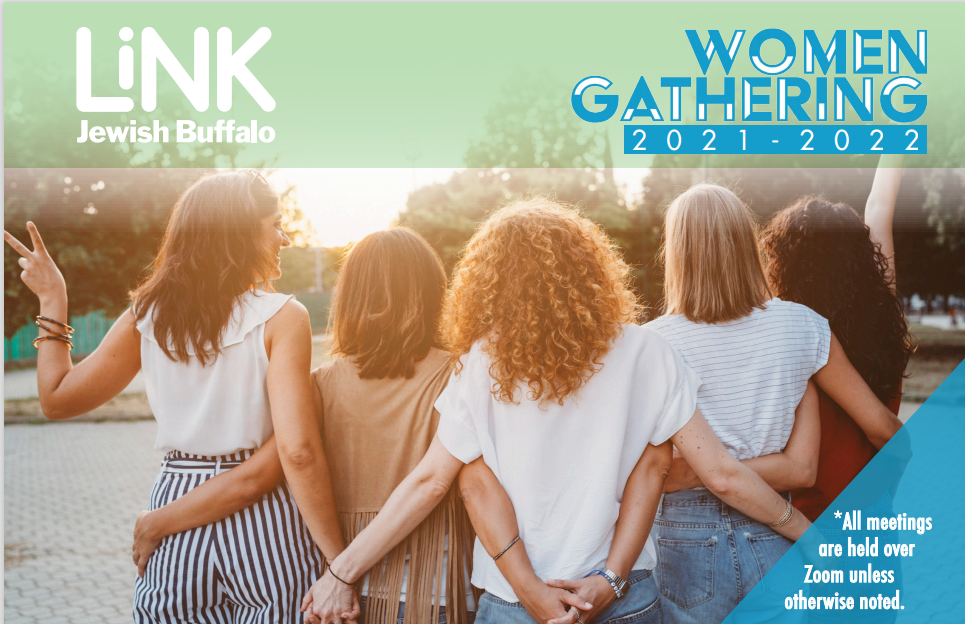 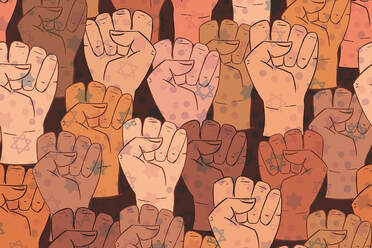 Back in June of 2020, the nation imploded. Already ailed by a horrific and badly managed pandemic — one that disproportionately affected People of Color — the killing of George Floyd saw Americans take to the streets and decry systemic racism and its deadly afflictions. We (mostly) agreed, as a country, that enough was enough.
But what about the aftermath? In the wake of the re-rise of the Black Lives Matter movement, did we do enough? Simply put, the answer for white and white-presenting Jews has to be no. As we are so often reminded, anti-racist work is not finite.
Read Full Article

The State of Holocaust Education in America 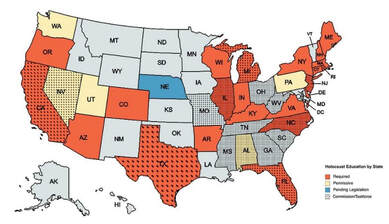 The State of Holocaust Education in America
Fifty years ago, Holocaust education was introduced in public schools as a way to encourage moral development. In an era of polarization, is this message at risk of being forgotten?

​As the red army approached the Majdanek death camp outside Lublin, Poland, from the east, Nazi SS guards took prisoners not capable of marching westward and gunned them down. They fell lifeless into a narrow trench—all except one. Gizella Gross, her right hip and leg shattered by a previous beating, slid into the trench with no gunshot wounds. The guards raked the still bodies with gunfire, but once again, the bullets missed Gizella. She searched for air pockets between the corpses on top of her, and once the Germans departed, she emerged—one of the few living inmates at Majdanek when the Soviets arrived in 1944. Just barely alive at age 17, she weighed 60 pounds.
Read Full Article 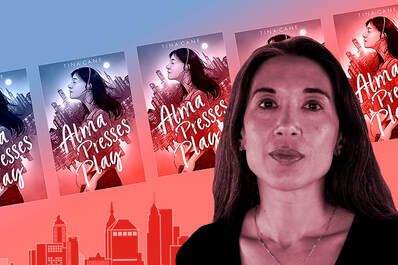 This Love Letter to Growing up Jewish and Chinese in 1980s NYC Is a Must-Read
Meet Alma, a 13-year-old half-Ashkenazi Jewish, half-Chinese girl who is coming of age in New York City in the 1980s. She loves to ride her bike and listen to music on her Walkman — everything from the Pretenders to Michael Jackson.
Alma is the creation of Tina Cane, herself a Jewish and Chinese American writer who grew up in downtown Manhattan. In her new book, “Alma Presses Play” — which is actually a YA novel-in-verse — Cane tells a captivating story that’s inspired by her own life. In the book, young Alma attends middle school, deals with her parents’ divorce and gets her first period — exploring her multicultural community and riding her bike along the way.
Read Full Article 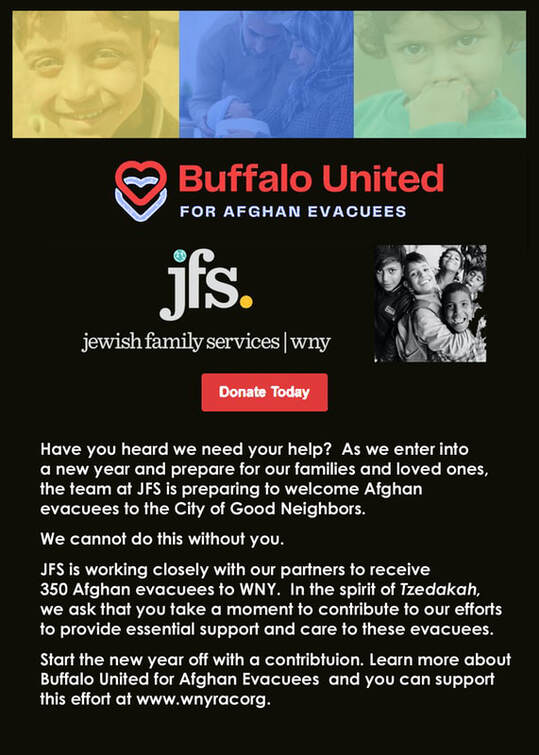 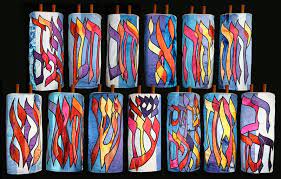 ​Check out your favorite virtual Kesher programs by clicking HERE.

Due to the need for social distance, all Kesher programs are virtual at this time. The most recent program was a virtual visit to Israel.  TBT Kesher Outstretched Arm aims to reach beyond our usual boundaries and create a positive experience for the community in the spirit of unity and belonging.

Beyond the Count: Experiences of Jews of Color

Important Report!  ​The Jews of Color Initiative releases the full report of Beyond the Count: Perspectives and Lived Experiences of Jews of Color – the first-ever study of this scale on Jews of Color in the United States.

Dive into the findings for yourself and get a bird's-eye view of the JoC community, from experiences with systemic racism to the vibrant and healing ways Jews of Color are connecting with one another and cultivating a beautifully multiracial Judaism. Whether you are seeing yourself reflected in the data as a Jew of Color or listening as an ally, Beyond the Count is a chance for our community to learn and move forward together toward a Jewish community that is for all of us.
Read Full Report 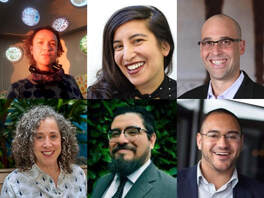 Researchers unveil massive study on Jews of color, boosting fight for racial justice with hard data.
Responses from more than 1,100 people in the study reveal a deep engagement with Jewish identity that has often come with experiences of discrimination in communal settings.

In some cases, Jews of color said they are ignored. In others they are casually interrogated about their race and ethnicity. Respondents said white Jews will sometimes presume a need to educate them about Jewish rituals or assume they are present in synagogues or schools as nannies and security guards rather than community members.
​
Some 80% of respondents said they have experienced discrimination in Jewish settings.
Titled “Beyond the Count,” the study out of Stanford University corroborates with data and the anecdotes of racism in the Jewish community that have been widespread for years. ​
Continue Reading

A new educational initiative of the Buffalo Jewish Federation is facilitating conversations between Jewish teenagers and their non-Jewish high school peers in an effort to promote understanding and fight anti-Semitism.

The program, called Student to Student, was originally developed by the Jewish Federation of St. Louis more than 10 years ago, but its replication in Western New York couldn’t be more timely: Hate crimes motivated by religion rose about 7% in 2019, according to the latest FBI statistics, and 60% of crimes in that category targeted Jews—far more than any other religious group. There’s also a closely documented link between anti-Semitism and a wide range of extremist groups in the U.S.
Read Full Article

The Buffalo Jewish Federation and The Foundation for Jewish Philanthropies have created a Community Compassion Fund to help our community through the COVID-19 crisis.
​
​Every dollar raised will go to support individuals and families.

Distributions will be administered by Jewish Family Services enabling them to support essential services to our most vulnerable populations so their basic needs can be met including mental health and wellness counseling, as well as funds for food, prescriptions, rent subsidies and other essentials.

So far, the Community Compassion Fund has provided financial support to furloughed Jewish communal workers, helped to underwrite the Seder in a Box program through Kosher Meals on Wheels, and assisted families with burial arrangements.
​
Together, we can do more! Your gift today will help the people of Jewish Buffalo tomorrow.
Donate Today!
Powered by